This is Part 2 in our series focused on platinum. Here we explore the unique supply-demand fundamentals that support our bullish outlook on platinum. Part 1 serves as a primer on platinum.

Platinum is Too Cheap to Ignore

If you’ve been scratching your head over the divergence in price between platinum and palladium, you’re not alone. Although we have favored palladium over platinum since 2012, we never expected palladium ($1,135) to be priced at a premium to platinum ($832), or for platinum to be trading at a nearly $400/oz discount to gold ($1,234)1. The primary culprit for platinum’s continued price weakness has been the negative impact of the diesel emissions scandal ("dieselgate"), as we discussed in Part 1.

At the time of this writing, you could purchase approximately three ounces of platinum for two ounces of gold. Platinum is trading well under the 1.0 platinum-to-gold ratio that is considered the historical norm, and which we have not seen since 2015. The current ratio of 0.67:1.0 means platinum is currently a bargain: an ounce of platinum is selling at 67% the price of an ounce of gold.

Platinum’s low price is not a reflection of lack of demand. As we explored in Part 1, platinum is not only an important investment asset, it is used in multiple industries and overall demand remains robust. Platinum supply continues to remain tight, and demand has outstripped supply in five of the past six years. With platinum supply under great pressure, we think that platinum has become too cheap to ignore. 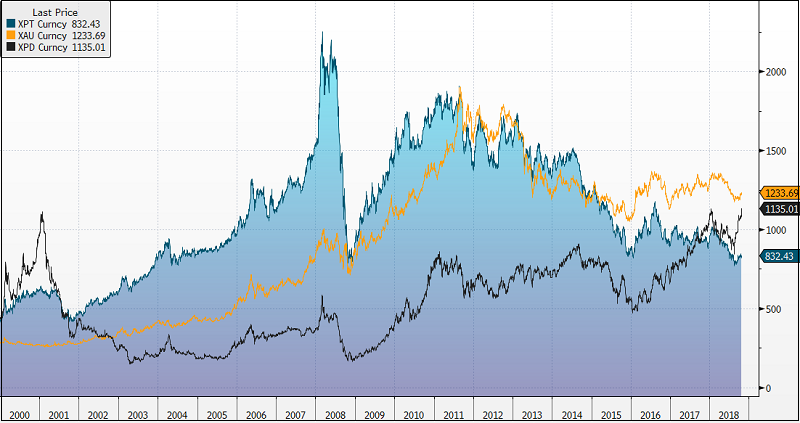 We have not been alone in observing the imbalance of supply and demand in platinum over the past six years. The size of above ground platinum stockpiles plugging the supply demand hole has been a hot topic at many commodity-focused events in recent years. While there has been plenty of speculation, very little data had been previously available, as not much analysis has been done on this issue. Unsurprisingly, the combination of rumor-mongering and the metaphorical broken telephone have a habit of making a mountain out of a molehill. The rumored estimate of the mysterious above-ground saleable platinum kept growing from 2012 into 2016. What was initially thought to be a 6 million ounce stockpile in 2012 grew to 10 million ounces in 2017 based on one industry anecdote.

How else could platinum prices continue to sharply decline between 2012 and 2017 when industry watchers such as World Platinum Investment Council (WPIC)and Johnson Matthey (JM) continued to report deficits as large as 720,000 ounces? We had heard similar rumors holding back the price of palladium in the early part of the decade. Russia had been selling its palladium stockpile to plug the deficit in the market at that time and the size of the Russian stock was prone to great exaggeration. As the Russian stockpile reached low levels, in late 2016 based on the sales we tracked through Switzerland, the price of palladium began appreciating rapidly as demand was outstripping supply. Thanks to the research done by the WPIC we now have a reasonable answer to the above-ground stock of saleable platinum. As Figure 2 shows, the above-ground stockpile is close to being exhausted.

Several astute, plugged-in investors have been aware of the issues plaguing platinum mines in South Africa, which account for almost 75% of global platinum production. Platinum bearing ores in South Africa are primarily mined from the Merensky Reef and the upper group 2 (UG-2) ore bodies in the Bushveld Igneous Complex (BIC). Both the Merensky and UG-2 ore bodies are too narrow to be mined using mechanized mining equipment. An immense amount of human labor is required to extract these ores. The mines have never had a great track record of safety due to the combination of poor infrastructure and weak enforcement of safety protocols. It is not uncommon to have workers who may be intoxicated, who may have drugs in their system or who may be sick, working underground in 110F+ heat. It comes as no surprise that with every injury or death, workers demand higher wages for risking life and limb.

Strikes occur annually and mine output is often affected. Every year, labor unions make outrageous demands and typically settle for a high single-digit wage increase. There have been years when strikes have persisted far longer than expected. 2014 was a particularly tough year, which saw large-scale strikes which lasted for five months. That year, South Africa’s platinum production contracted 16% versus 2013. The real impact of wage increases have partially been offset by inflation in South Africa.

As the price of platinum has faltered over the better part of the decade, and wages have increased, platinum miners have had to make some tough financial decisions. Investments needed to sustain output have declined, as have investments to increase output. Simply put, platinum miners are unprepared for an increase in demand. Equity investors in South Africa’s platinum sector have taken it on the chin. Previously high-flying platinum mining companies such as Lonmin, which accounts for almost 17% of South Africa’s platinum output have seen their share prices decline by 99% over the past five years. It is easy to understand why investors have been turned away from this space.

Why has Platinum Production Remained Resilient in the Face of Lower Platinum Prices?

Anyone reading about the platinum mining industry in South Africa will learn that the supply of platinum is declining. Production has slowly dropped since peaking in 2006, however, the declines have been quite modest. Sociopolitical factors, strong palladium prices and South African Rand weakness are the three key factors at play here and they deserve to be examined. 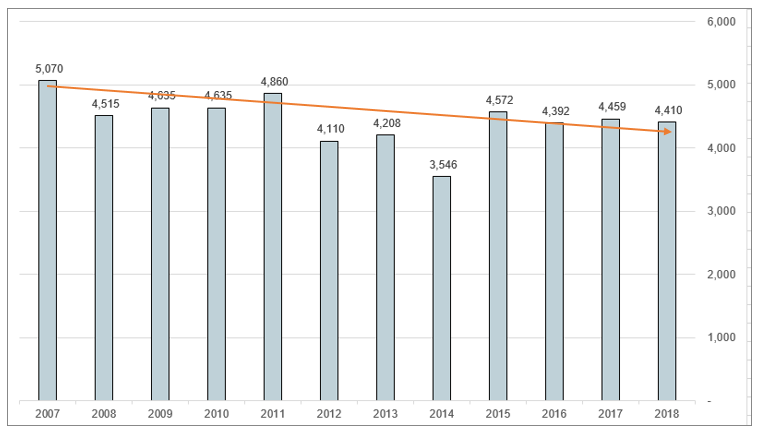 South Africa’s rise to becoming Africa’s wealthiest economy has been driven by its rich history of mining. Gold, diamonds, platinum and coal have all been mined in South Africa for decades, which in turn has driven its economic development. However, there still exists a vast divide between the wealthy and the poor today.

While there is a growing number of educated, highly skilled blacks in South Africa, the impact of Apartheid which began in 1948 and ended in 1995 continues to be felt today. The economic mishandling under Jacob Zuma has resulted in high inflation, high levels of violent crime and high unemployment. The latter is of particular concern because with today’s unemployment level hovering around 27% and almost 500,000 South Africans employed by the mining sector, the social cost of laying off workers is astronomical. 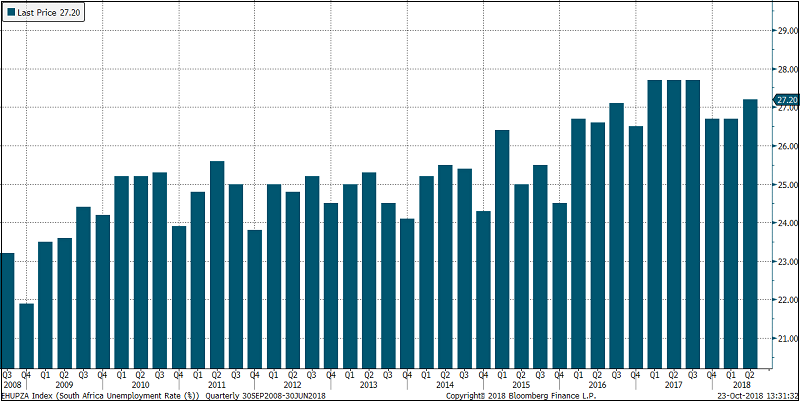 According to the Minerals Council of South Africa, each worker employed in a South African mine has nine dependents. As recently as 2012, the government has gone so far as to threaten to take away the mining licenses of companies deemed to be “misrepresenting their intentions.” This threat came after Anglo American Platinum (Amplats), one of the world’s largest mining companies, submitted a proposal to mothball portions of its Rustenburg operations at the cost of 14,000 jobs.

Uneconomic mines, which would be closed in most countries, continue to be operated in South Africa and will likely continue to do so until the operating companies go bankrupt, or until the unemployment rate improves.

Strong palladium prices have been a godsend to South African platinum miners. Like many other metals, platinum occurs in the ground in combination with palladium, rhodium and gold. This basket of precious metals is mined as a single unit out of the ground in South Africa and across the world.

South African mines are the only mines known to produce a higher content of platinum versus palladium, whereas, virtually all other known ore bodies have a higher concentration of palladium over platinum. On a rather simplistic basis, a single unit of ore in South African mines contains approximately 58% platinum, 32% palladium, 8% rhodium and 2% gold by volume. This means that a drop in platinum can be offset if the price of palladium or rhodium rises sufficiently. Platinum prices have declined by almost 40% in the past five years, while the price of gold has held steady. Palladium has gained 35%. Rhodium has appreciated by a whopping 225% in the same period. As platinum prices have collapsed by 40% over the past five years, the impact has been buffered by rising palladium and rhodium prices. The Platinum Group Metals (PGM) basket price has declined by under 20% in the same period. 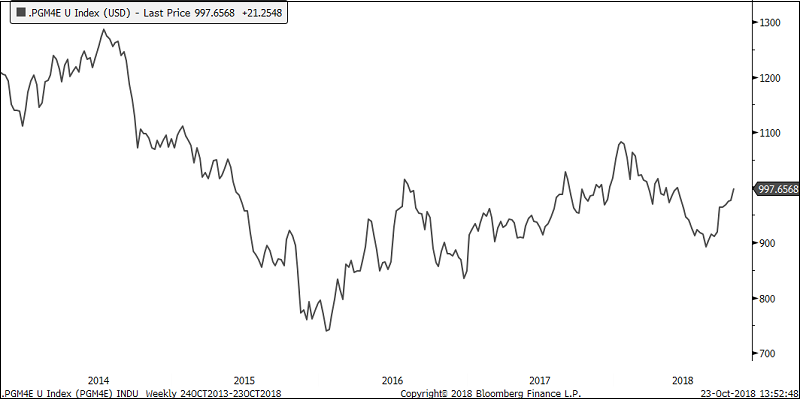 Thus far, we have been analyzing the data through the lens of the U.S. dollar. At the ground level, a majority of the costs are measured in South Africa’s local currency, the Rand. The South African economy remains weak and has long been plagued by the twin ravages of high unemployment and high inflation, which has naturally led to a decline in the Rand. In the past five years alone, the Rand has lost nearly 25% of its value to the U.S. Dollar. 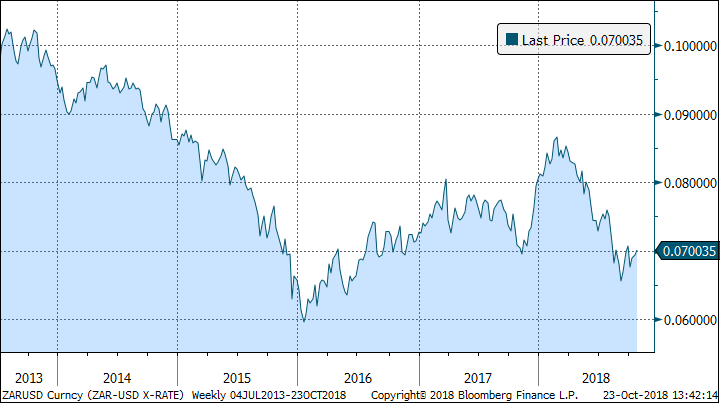 The Rand’s weakness has been a small blessing for South African miners, but this is not saying much given their shockingly bad share price performance. The miners’ largest cost is labor, which accounts for about 60% of total expenses. Due to the drop in the Rand, even with platinum dropping 40% in USD terms, the revenues earned by the miners have increased by more than 10% per unit of volume over the past five years.

Unfortunately, the small problems in the platinum mining space have become large problems over time. Labor costs continue to increase at a faster rate than the Rand has weakened. Access to electricity has remained challenging. The socioeconomic situation in South Africa has continued to deteriorate. Investments to sustain mine production have been declining. The balance sheets of virtually all African PGM miners, except for Amplats, are stretched to the point of breaking. Companies such as Lonmin, which is unable to operate on its own, are being absorbed into other entities. According to our research, almost 50%  of platinum mining in South Africa and neighboring Zimbabwe is now uneconomic.

In 2020, JP Morgan estimates that 55% of the PGM miners will be uneconomic at the current PGM basket price. Unless platinum prices rise materially, 1.7 million ounces of platinum supply, almost 30% of the global mine supply is at a threat of being turned off.

With above-ground stocks close to depletion and a majority of mined supply at uneconomic levels, we can only reach one conclusion: Platinum is too cheap to ignore.