Sources: Bloomberg and Sprott Asset Management LP. Data as of October 31, 2022.
*Performance for periods under one year not annualized.

Many asset classes rebounded in October following painful September drawdowns. The U3O8 uranium spot price climbed 8.32% in October, rising from $48.25 to $52.27 per pound. By comparison, the broader commodity markets gained just 1.67%. Among other asset classes, U.S. equity markets gained 8.10% as measured by the S&P 500 Index, and U.S. bond markets (Bloomberg US Agg Bond Index) lost ground on the back of rising inflation and the hawkish Federal Reserve. On a year-to-date basis, as of October 31, 2022, the uranium spot price climbed by 24.12%, making it one of the best-performing asset classes.

Uranium mining equities also posted positive results in October, with the Northshore Global Uranium Mining Index gaining 3.11% for the month. Miners’ overall results were impacted by the weakness in the stock price of index heavyweight Cameco Corp. (Cameco) following its announcement of a $US748 million stock sale to raise capital for its planned acquisition of Westinghouse Electric Company (Westinghouse) in partnership with Brookfield Renewable Partners (Brookfield Renewable). Year to date, uranium miners have lost 6.38%, which compares favorably to the year-to-date 17.72% drop in the S&P 500 Index.

Figure 1. Uranium Continues to Outperform in the Short Term (2020-2022)
This chart shows the relative outperformance of physical uranium and uranium mining equities over the past two years. 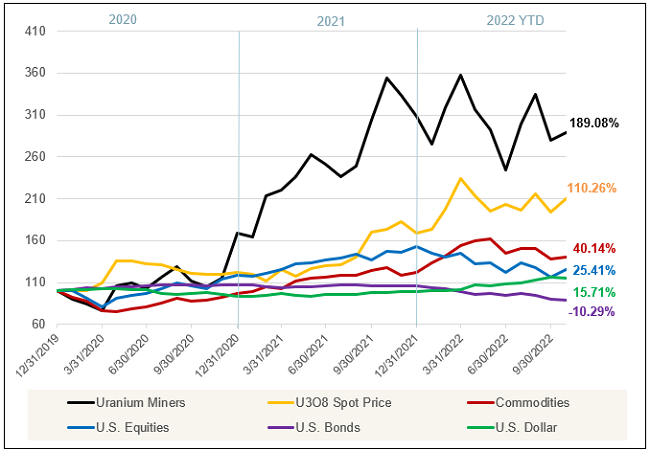 The International Energy Agency (IEA) released its 2022 World Energy Outlook in October, further underscoring the importance of nuclear energy and uranium in supporting the world’s energy transition away from its dependence on fossil fuels and in ensuring higher energy security. According to the IEA, “Russia’s invasion of Ukraine has sparked a global energy crisis”. Russian sanctions and geopolitical maneuvering have tightened the world’s energy supply and caused energy prices to spike, stoking inflationary pressures and heightening the risk of recession. This energy deficit has created an urgent catalyst to embrace alternatives to fossil fuels and supports our thesis that nuclear power will likely be pivotal to the global energy transition.

The IEA has increased its forecasts of nuclear power, reporting that it expects nuclear energy generation to grow 53% from 2021 to 2050 based on current stated government policies in place, 84% based on announced government targets and 109% on its net zero emissions by 2050 scenario. With nuclear energy’s generation potential to double by 2050, the uranium sector is likely poised to benefit.

On October 11, Cameco Corporation announced that it would form a strategic partnership with Brookfield Renewable Partners to acquire Westinghouse Electric Company.6 Brookfield Renewable will own a 51% interest and Cameco 49%. This acquisition marks the largest in recent history, with Westinghouse’s market capitalization of US$4.5 billion, not including debt, being nearly half of Cameco’s $9.8 billion market capitalization.7 Westinghouse operates as a downstream company providing nuclear operating plant services, designing and engineering new nuclear reactors and providing nuclear fuel services. The initial market reaction to the deal was negative, as Cameco’s stock slid 14% in response to the pricing terms of the bought deal stock sale. Cameco’s stock price recovered somewhat but remained down for the month. In our view, the acquisition is a healthy sign that the uranium industry is moving forward and is a vote of confidence from Cameco in the nuclear industry. The partnership represents a vertical integration across the uranium fuel supply chain that is likely to enhance Cameco’s ability to win new business.

The market reacted more favorably to Uranium Energy Corp’s completed acquisition of the Roughrider uranium development project from a subsidiary of Rio Tinto PLC, and Uranium Energy was the top-performing holding in the Northshore Global Uranium Mining Index for the month.8 Denison Mines Corp. (Denison) filed its environmental impact statement (EIS) on October 26.9 For Denison, this represents a crucial step in the permitting process to develop its Wheeler River uranium mine. NexGen Energy Ltd., another late-stage uranium developer, filed its EIS earlier this year.10

In our view, the October performance of uranium mining equities does not reflect the sector’s strong underlying fundamentals. Year-to-date as of October 31, U3O8 spot, conversion and enriched uranium prices have all significantly appreciated for both short- and long-term purchase contracts. By contrast, uranium miners remain in negative territory, as they have been impacted by weakness in broad equity markets and rising interest rates. Despite this, we believe that strong demand for uranium conversion and enrichment, coupled with a shift away from Russian suppliers, supports a further increase in the U3O8 uranium spot price, which is ultimately supportive of uranium miners.

Cameco, for example, continues to report strong growth in its portfolio of long-term uranium contracts as utilities are accelerating uranium purchases. In 2019, pre-COVID, Cameco estimated that, from 2020 through 2024, it had commitments to deliver an average of 19 million pounds per year.11 In 2021, Cameco added 30 million pounds in contracts. This year, Cameco is projected to add 77 million pounds in contracts. In its recent Q3 earning report, Cameco announced it has “advanced contracting discussions for about 27 million pounds of long-term uranium business and 7.5 million kgU (kilograms of uranium) of conversion services from initiation to accepted.”  This is in addition to Cameco's uranium year-to-date contracts of 50 million pounds of U3O8 and 7 million kgU of conversion. The uranium contracts are expected to be finalized over the next few months, underscoring Cameco’s belief that the uranium sector is in the early stages of the contracting cycle.

We believe that uranium demand will continue to gain momentum, as many countries are seeing record-high electricity prices going into high-demand seasons. In addition, the security of the supply of nuclear fuel is paramount, as national grids rely on baseload nuclear power for stability, utilities are focused on replenishing inventory levels to ensure access to fuel and fuel costs have a relatively small impact on the overall profitability of nuclear power plants; historically, uranium demand has not been price sensitive.

We believe the uranium bull market remains intact despite the negative macroeconomic environment. There has been an unprecedented number of announcements for nuclear power plant restarts, life extensions and new builds that are all creating incremental demand for uranium. However, the current uranium price remains below incentive levels to restart tier 2 production and greenfield development. Over the long term, increased demand in the face of an uncertain uranium supply may likely support a sustained bull market. For investors, uranium miners have historically exhibited low/moderate correlation to many major asset classes, potentially providing portfolio diversification. 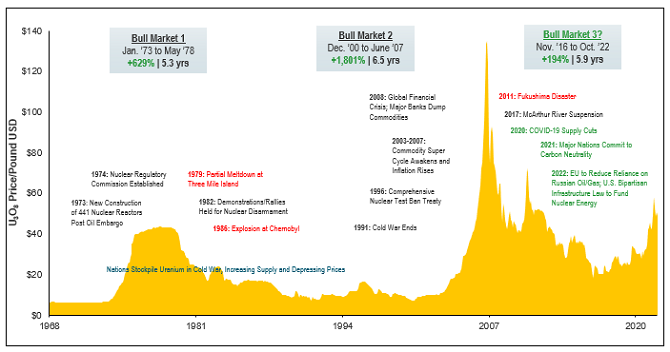 In closing, we continue to believe that physical uranium and uranium miners are well positioned to take share within the energy sector as energy security and decarbonization increase in importance. With the number of nuclear reactors planned to increase by 35%, governments are signaling the need to embrace the reliable, efficient, clean and safe energy produced by nuclear to meet ambitious decarbonization goals. At the same time, a uranium supply deficit remains entrenched and uranium miners may be the recipients of increased investment, which may in turn bring the market back into balance. 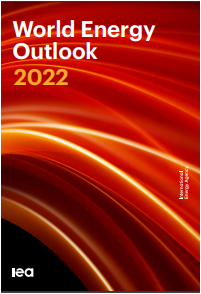 "The global energy crisis provides a short‐term boost to demand for oil and coal as consumers scramble for alternatives to high-priced gas. But the lasting gains from the crisis accrue to low‐emissions sources, mainly renewables, but also nuclear, alongside faster progress with efficiency and electrification, e.g., electric vehicles."