The Sweet Spot for Gold Equities October was another consolidation month for gold bullion. Gold traded in a narrow $33/oz range dictated mainly by the action of global bond yields. Gold held above our support level of $1,450 and consolidated within a bullish wedge pattern. From a positioning view, Commodity Futures Trading Commission (CFTC) longs had a minor pullback. CFTC shorts remained unchanged while ETF holdings continued their gradual accumulation. Since the gold price peak in early September, there has been an uneven nascent risk-on short-term basing action in some parts of the capital markets. The October 30 Federal Open Market Committee (FOMC) meeting resulted in the expected 25 basis point cut in interest rates and a signal from the Fed that future rate cuts may be on hold, representing more of a “pause-lite” rather than an “absolute pause.” With the “Fed put” reaffirmed, the U.S. stock market rallied to new all-time highs, yields declined, the U.S. dollar fell and gold closed higher on the day.

We believe that the recent injection of liquidity has continued to inflate asset prices. The S&P 500 Index has made new highs despite weakening global growth, an earnings slowdown and funding stress. By contrast, global bonds continued to trade near highs as signs of economic weakness abound. The 5Y/5Y inflation swaps for both the U.S. and EU remain subdued with a long-term downtrend solidly in place. The EU 5Y/5Y touched all-time lows in October despite the launch of quantitative easing (QE) by the European Central Bank (ECB). Credit stress remains subdued, likely due to the massive liquidity injections in the repo market, although LIBOR-OIS (London interbank offered rate-overnight indexed swaps) spreads remain elevated in line with the condition of the repo market. Commodities continued to struggle as demand remained weak. Gold bullion, by contrast, still has a very constructive outlook in the medium- and long-term.

Figure 1. Gold Bullion is Consolidating Below the Last Significant Resistance Level Before a Re-Test of Previous Highs 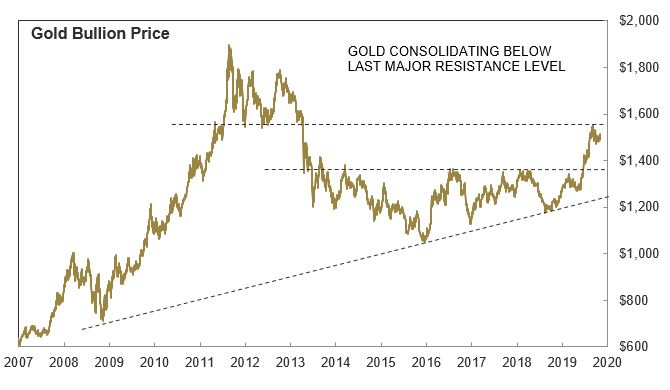 Gold Equity Earnings About to Surge

Gold companies will be announcing Q3 earnings shortly with the majority reporting in the first week of November. We mentioned in our prior commentaries that the increase in gold pricing would be reflected in gold companies’ earnings materially. The average price of gold bullion in Q3 was $1,474/oz, which is 12.6% higher than the Q2 average of $1,309/oz. Using the World Gold Council’s data on gold production costs, the industry has roughly an all-in-sustaining-cost (AISC) of $900/oz.

Here we take a stab at estimating the impact of the higher gold price on gold producers’ profits. We are assuming that the Q3 industry AISC is likely to remain unchanged at $900/oz as the main component costs of labor and energy remained subdued.

Q3 over Q2 profits, in general, should increase about $165/oz or 40% higher based on the 12.6% gold price increase. This quarter-over-quarter increase is materially higher than any industry that we have scanned. The operating leverage in profit increase also helps illustrate why historically gold equities typically have a 2x to 3x leverage to gold prices. High-cost producers will benefit even more as their leverage to the change in the gold price is much higher. If we use a higher cost Q3 AISC of $1,000/oz in this example, the Q3 profit will be $475/oz versus Q2 profit of $310, or 53% higher.

We're in the Sweet Spot for Gold Mining Company Earnings

There are also indications that gold company Q3 earnings may enjoy an additional positive earnings surprise. According to Bloomberg, the consensus gold price deck used by analysts for Q3 earnings estimates was $1,430/oz versus a realized gold price of $1,474/oz. A quick calculation indicates a potential 10% earnings per share (EPS) surprise based on the difference between the lower price deck used and the realized gold price. At this stage in the gold cycle, we are in the sweet spot for gold mining company earnings. A starting low gold price base will result in earnings changes with a high percentage increase when measured quarter-over-quarter or year-over-year. Expectations are very muted after years of disappointment, and the probability of earning surprises is higher. Lastly, other major market sectors are predicted to experience modest earnings expectations making comparisons to gold company earnings quite dramatic.

We are in the sweet spot for gold mining company earnings.

Although at this writing, it is still early, two large gold mining companies have already reported significant earnings beats. Agnico Eagle Mines (NYSE: AEM) reported Q3 EPS of $0.37 versus expected EPS of $0.275 (a 34.5% beat). The company’s stock was up 6.4% and volumes were 54% above average on the earnings reporting date. Yamana Gold (NYSE: AUY) also had a significant Q3 EPS beat of $0.05 versus expectations of $0.021 (133% higher than expected). The company’s stock gained 8.0% and volumes surged 210% above average on the earnings reporting date. Judging by the trading volumes, quant funds (and other funds) are buying. Over the next few weeks, we would expect EPS revision momentum to rise on 2020E EPS numbers. 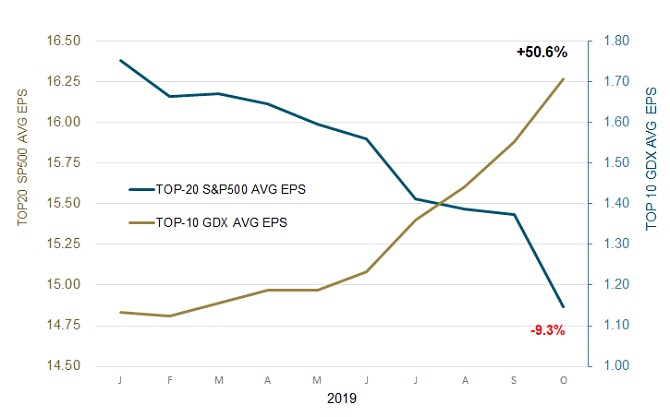 This counter-trend in the comparative earnings outlook provides yet another example of how gold equities can be used as a hedge against the broader market.

As gold companies report their Q3 earnings in early November, we expect robust earnings results to lift gold equity prices. The timing may be favorable as we are also heading into the best consecutive four-month seasonality pattern for gold mining equities. Figures 3 and 4 illustrate the last 20 years of the GDM Index’s seasonal pattern. Typically after a September to October correction period, gold equities on average put in a favorable four-month return period which usually peaks out in late February. On average, August is the best single month for gold equities performance. 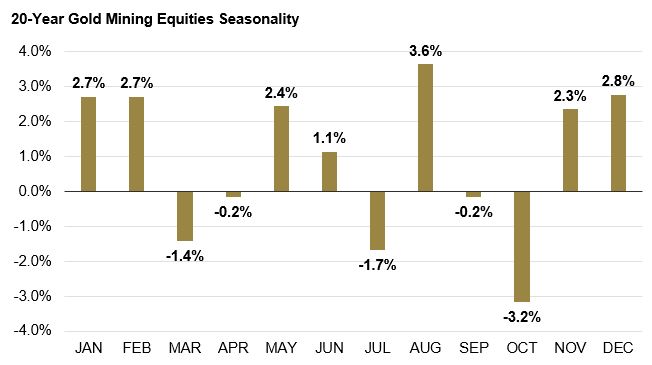 This is another way of looking at the same data but expressed differently. The Y-axis indicates the percentage of times the monthly return was positive. The X-axis is a modified Sharpe Ratio (return adjusted for volatility, a higher Sharpe number is better). This method gives better detail, highlights the probability of success and factors in high-volatility periods. 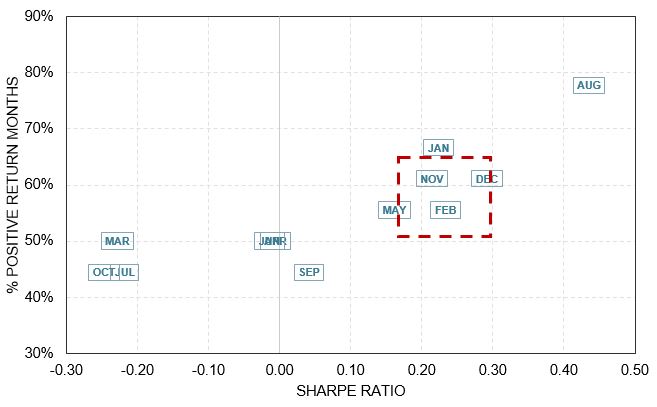 In October, we saw further signs of economic weakness. The September Institute of Supply Management Purchasing Managers Index (ISM US PMI)5 came in at 47.8 below the 49.1 reading for August, and well below the consensus estimate of 50.0 for September (a reading above 50 indicates expansion, while a reading below 50 indicates contraction).

The ISM quoted the Global Trade War as the most significant cause of the declining PMI. Negotiations between the U.S. and China progressed in October without a defining resolution, although a “Phase One” trade agreement was reached with an expected November signing. China reported its Q3 2019 GDP indicating year-over-year growth of 6.0%. Although seemingly high, this represents the lowest annual growth rate for China in 27 years. China’s October manufacturing PMI also fell further into contraction territory with a 49.3 reading. Given the importance of manufacturing to China’s economy, more stimulus is likely.

The World Bank and International Monetary Fund (IMF) both downgraded global growth to the lowest levels in almost 10 years, citing the U.S.-China trade war, Brexit, Europe and the synchronized nature of slowing growth trends. The Brexit decision, another significant economic risk, is now delayed to January 31, 2020, but continues to fuel uncertainty and curb business activity.

The Fed also emphatically declares this is “not QE” (though it looks, sounds and acts like QE). The increase in repo liquidity was also well subscribed, indicating continued reserve tightness. The reserve liquidity tightness we have been seeing is probably now best viewed by the Fed’s balance sheet expansion. Since the low of August 28, the Fed’s balance sheet has grown $260 billion in two months. What began as a short-term funding facility for some idiosyncratic funding pressures has now been extended to at least January 2020, and continues to grow in size at a shocking rate. The funding shortage that exploded on September 16 continues to deteriorate despite the rapidly increasing liquidity facility. Last month, we called this “QE Lite,” but it is no longer looking so lite. We will keep an eye on credit stress; if it were to rise dramatically in this tight liquidity environment, the negative feedback into capital markets would be very detrimental.

After almost two years of trying to shrink the Fed balance sheet Quantitative Tightening (QT) on its course to “normalization” of monetary policy, the Fed has reversed course. In two months, the Fed balance sheet has expanded by $260 billion at the end of October, and this number is likely to grow into January at least. This $260 billion works out to about 37% of the $700 billion QT program so far. And three rate cuts totaling 75 basis points. All this in a backdrop of a positive but slowing economy. What happens when it gets negative? If it isn’t apparent yet, this is the new normal; the world cannot seem to escape from QE, monetary debasement, or any other name (see Japan, the EU and now the U.S.). 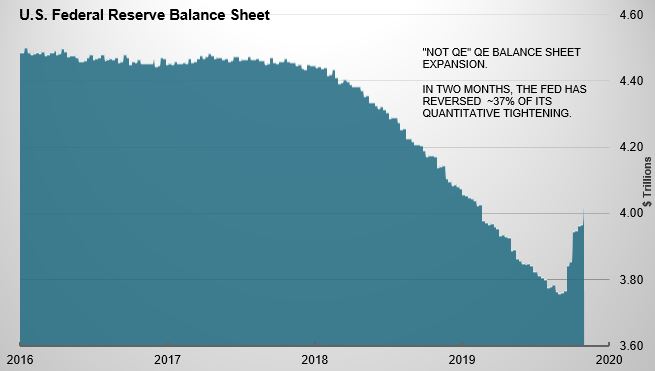 Whatever the number should be, the current level is not enough, and it needs to go much higher quickly. In this reserve funding gap, a liquidity crisis is a distinct risk if a shock-event were to occur. In the repo stress during September, it became evident that the level of reserve balances was inadequate relative to the amount of U.S. Treasuries outstanding. Somewhere in this equation, the rapidly expanding Federal deficit is likely playing a role. The deficit is $0.984 trillion currently and is rising to $1.1 trillion in 2020. The year-over-year rate of change in the Federal deficit is running at an alarming 25% growth rate. (Apologies, modern monetary theorists.) 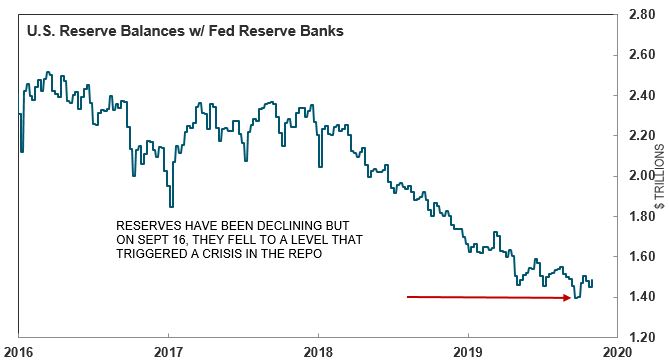 There are many reasons why gold is an attractive investment right now. As we have stated in previous posts, when a portfolio includes an allocation to gold, the effect of gold’s non-correlated behavior will help lower the portfolio’s volatility. In addition, gold mining company equities offer a valuation opportunity that is tremendous right now, given the likelihood of very positive Q3 earnings reports.