September saw a continuation of August's challenges, further weakening the precious metals complex. Gold bullion1 ended the month down 3.12% and the yellow metal remains underwater at -7.45% YTD through September 30, 2021. Gold mining equities3 were hit hard again last month, losing 9.41%, and are down 18.03% YTD as of September 30. Silver2 lost 7.20% in September and is down 16.03% YTD.

*Mo % and YTD % Chg are expressed in basis points (BPS) rather than percentages.

September's end brought on a new season and a welcomed uptick in gold prices. Gold ended the month at $1,757 per ounce after struggling for much of September and falling from the $1,814 per ounce price level set in August and late July. Yet, gold is priced well above its March low of $1,683 per ounce.

Gold traded around $1,800 per ounce during the first part of September, as the U.S. Federal Reserve (Fed) held forth a cautious approach to withdrawing stimulus from the U.S. economy. The Fed has emphasized that substantial progress was needed on its inflation objective as a pre-condition for tapering. This has been the focus of markets and created a distraction for gold. The U.S. dollar (USD) checked its August pullback early in the month with a firming as market confidence began to bet on economic success from monetary and fiscal policies.

While gold prices held around $1,800 per ounce during the second week of September, further USD strength developed mid-month as markets expressed concerns around the debt crisis of China's Evergrande Group. Gold registered a muted, if not negative, response as some Asian selling appeared to hold back gold prices. Better U.S. economic data and weakening Chinese economic news further supported the USD as gold prices sold off mid-month. U.S. Treasury 10 YR yields were also inching higher for the first half of the month after building their base around 1.28%, as global inflationary pressures continued to mount.

All Eyes on the Fed Taper

Markets began to re-interpret the tapering narrative as Fed Chairman Jerome Powell commented at the September 21-22 Federal Open Market Committee (FOMC) meeting that the withdrawal of asset purchases could begin after its November meeting, predicated on reasonably strong job growth. Powell also indicated that the taper process would end sometime in mid-2022.

Rather than fear the tapering message, markets took it to signal that the macro-economic environment was becoming healthy enough to get by without additional government assistance. That notion further weakened interest in gold as summer gave way to fall in the third week of September, and U.S. Treasury 10 YR yields headed back up through 1.30% before closing out the month at 1.49%. That final move in U.S. Treasury 10 YR yields near month-end pushed down gold as the USD strengthened. Foreign central banks began to talk about and initiated interest rate increases, even as the Fed indicated its interest rate policy agenda differed from its tapering intentions. A lift to the federal funds rate is not likely until late 2022 or beyond.

On the final day of September, gold prices bounced up, putting on the biggest daily gain since March, as U.S. jobless claims rose instead of falling as expected. The market read-through on that suggested economic activity was not as robust as markets were pricing in and reflected a risk that slowing economic activity could impede the Fed's tapering plan ⁠— a positive for gold.

Gold's upbeat finish at month-end also reflected the uncertainty of recent macroeconomic progress. Markets remain concerned over supply chain issues, developing inflationary pressures, progress on COVID pandemic control, weaker labor markets, a temporary resolve to the U.S. government debt limits, slowing Chinese economic activity along with tighter energy supplies and rising oil prices. The U.S. Congress rapidly agreed to avert a government shutdown on a close deadline with a nine-week spending bill. That provided some relief to the downturn gold saw during most of September, as did the uncertainty of future U.S. economic growth, with debt limits discussions and further government funding yet to be resolved.

Gold stocks had a more difficult month than gold bullion prices. Precious metals stocks seemed to collectively reflect the risks lower gold prices place on profit margins for gold producers and those developing companies in need of growth capital. While gold miners are price takers and typically fully exposed to gold price risks, markets are beginning to price in the impact of higher operating costs on margins. Labor, materials and operating access have all seen cost escalation since earlier in the year, similar to the impact across the economy in many manufacturing and industrial sectors, basically, because of supply constraints. Generally, most gold miners can manage costs, but the current environment puts pressure on the sector's exceptionally good margins. Markets are now beginning to factor in a squeeze on margins from the price-side and the cost-side.

That is certainly one interpretation of the poor performance of gold miners during September. Some analysts have suggested that the valuations of gold stocks based on discounted cash flow models are factoring in a gold price of $1,450 to $1,500 per ounce. That may be possible, but it is worth recognizing that cash flow models can generate various outcomes and value profiles that markets measure differently. We think that if valuations on equities are factoring lower gold prices, the market may only confirm a lower price briefly, as has been seen before, but at much higher levels than the forecasts used in the past, during different precious metals cycles.

As long-term investors in precious metals companies, we take a view in which compelling value as seen in balance sheets, operations that can adjust to various margin scenarios (many producers can successfully produce cash flow from economic reserves and resources at below $1,300 per ounce) and attractive precious metal equity valuations, all provide a rational investment opportunity. Of course, support of the gold price is important.

Lower real rates have provided an important and sound underpinning for gold prices. The following charts of the Global Credit Impulse/Purchasing Managers Index and China Credit Impulse7 suggest that real interest rates are likely headed lower to maintain economic activity, despite the back-up in rates in September.

(In Figure 1, Global Credit Impulse measures the impacts of new lending increments, or acceleration of credits, to GDP growth. Rising figures reflect increased lending activity, often in conjunction with easy lending conditions, where more credit is being created relative to GDP growth. Lower figures reflect falling credit creation relative to GDP, often indicative of a more challenging lending environment. Global PMI measured by .GLBPMI G Index. The Purchasing Managers' Index (PMI) is a survey-based economic indicator designed to provide a timely insight into business conditions. The PMI is widely used to anticipate changes in economic trends, or is an alternative gauge of economic performance. Figures are measured between 0 and 100. Readings over 50 reflect an improvement on the previous month, while readings below 50 reflect a deterioration.) 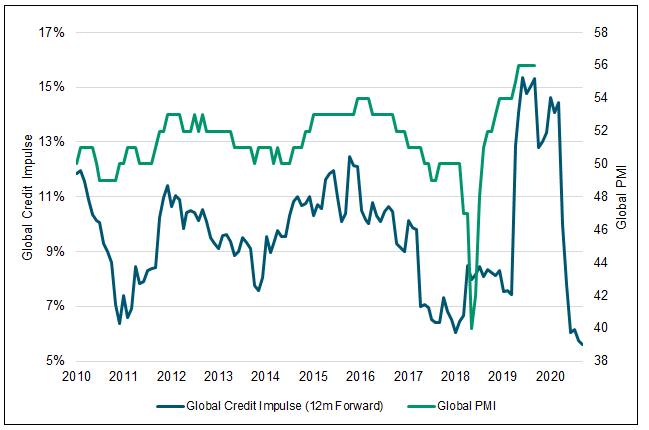 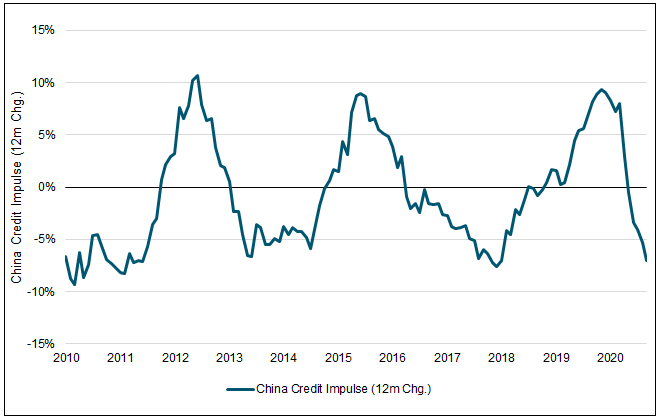 A Slowdown in Global Economic Activity?

The observation the charts make is that Global Credit Impulse (a change in new credit issued as a percentage of gross domestic product, or GDP), an important driver to growth and purchasing manager activity and the Purchasing Manager Index, which leads actual economic purchasing activity by about 12-15 months, peaked in late 2020. That would imply that a slowdown in global economic activity could become more pronounced, possibly over the next two or three quarters. That slowdown may already be appearing in the jobs data.

While COVID-related distortions are considerations and are possible distractions to the transfer of that global credit growth to purchasing manager activity, slower global economic activity does appear to be showing itself in China. China's credit growth has also slowed significantly, as has its economy — with Goldman Sachs recently downgrading Chinese 3Q21 growth at 0% as energy constraints and debt deleveraging put a drag on economic output.

The response to slowing global economic activity is likely to be additional fiscal and monetary stimulus, not less. Despite what markets are told to focus on — that tapering is coming — more economic stimulus will be needed. The recent backing by China's government to provide Evergrande Group credit to meet its obligation would seem to suggest that accommodation to maintain global markets will continue with a need to grow global credit. Certainly, the extension of the U.S. government's borrowing authority to avoid a potential credit default at the last minute illustrates the need for continued credit expansion.

What seems to have been mispriced by the market is that credit growth needs to occur at increasingly negative real rates as inflation continues to rise and more than offset the recent change in nominal rates. While it is difficult to imagine real rates becoming more negative, it would not be unusual. Witness Figure 3. during the 1940s, 1920s and 1860s — periods of significant cultural and social change.

Recently, Fed Chair Powell clarified some views. After expecting inflation to be transitory in August, there was a re-think in late September, and Powell acknowledged it might not be exactly transitory, saying, "The process of reopening the economy is unprecedented, as was the shutdown. As reopening continues, bottlenecks, hiring difficulties, and other constraints could again prove greater and more enduring than anticipated, posing upside risks to inflation. If sustained higher inflation were to become a serious concern, we would certainly respond and use our tools to ensure that inflation runs at levels that are consistent with our goal." (These remarks were delivered on September 28 to the Senate Banking Committee.)

The markets took those remarks as hawkish and seemed to give the Fed the benefit of the doubt that it can manage the economy. However, it is worth wondering if the Fed can truly afford tighter credit markets with higher interest rates to address inflationary forces —  if GDP growth recovery slows and China goes on pause with a commanding need for energy supplies, which is now another new concern for markets. Increased market uncertainty and the growing signs of slower global growth are ample reasons for investors to reconsider gold.