Precious Metals and Miners Soar in 2019

After consolidating for the past four months, gold bullion broke out of its corrective range in the last few days of December due to a combination of factors, with U.S. dollar weakness being the most prominent. Yields remain rangebound at the lower-end despite the favorable resolution of the U.S.-China Phase One Trade Deal and renewed hope for a reflationary market. Equity markets overall continued their ramp up into year-end backed by the massive expansion in the U.S. Federal Reserve’s ("U.S. Fed") balance sheet.

What stands out in this correction is the surprising resilience of the CFTC positions.4 CFTC positioning has been dominated by quant funds/CTAs,5 which are model-driven. They began the year by adding, had a selling leg into April, bought aggressively in May and June and have held steady since then. Despite all the noise in the past few months, their models remain positive on gold. 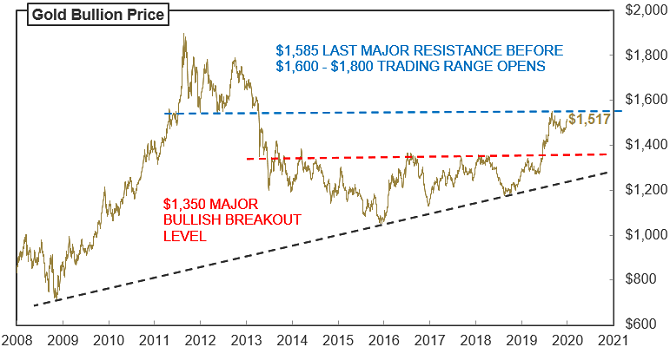 GDX, a measure of gold mining equities performance, held the $26 level convincingly during the correction and has now broken out above $28. As the price kept approaching the $26 level, selling pressure kept fading as there were no real sellers. Through the $28 breakout, we saw the opposite as buying pressure increased — a positive sign. We are nearing two significant highs: the September 2019 closing high of $30.95 and the August 2016 closing high of $31.32. Surpassing the $30.95 level will set up a cup-and-handle breakout to target the $36 level, well beyond the $31.32 high. We then see little resistance until the $39.35 level. The 50% Fibonacci retracement of the entire 2011 to 2016 bear market is at $39.55. On a successful breakout, $39.50 is the next target level for GDX.

A breakout will establish a large multi-year bullish base pattern, and there will be little resistance until the $39.50 level. 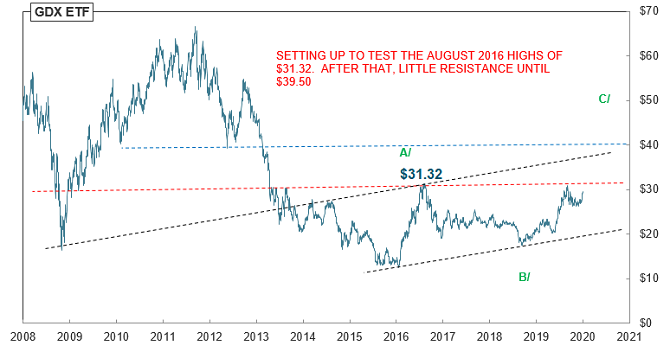 Currently, the consensus view for interest rates is higher, with about 70 interest rate cuts globally in 2019. Given the U.S.-China trade deal, the reflation narrative is back as the market expectation is for an economic reacceleration. We believe there will be a lift in the economic outlook, though it will likely be less than current expectations. We are at the very late stages of this expansion cycle, which is already the longest in U.S. history at 125 months (bottom at June 2009).

On January 15, Trump is expected to sign the U.S.-China Phase One Trade Deal agreement. Phase Two talks will be much more contentious and complicated, involving intellectual property, technology transfers and capital investments. Not much capital investment related to trade will be committed by businesses without Phase Two completed. For perspective, the reflation trade has not occurred in the past decade beyond a short-lived trading action. Despite massive amounts of QE (quantitative easing) programs, fiscal stimulus, enormous debt, record low interest rates and other measures, growth has been weak and inconsistent for a reflationary capital market. We don’t see how the events of the past few months will change this outlook except for the market sentiment.

In 2020, we think U.S. dollar weakness will be the second leg for the gold advance.

Third-quarter U.S. GDP (gross domestic product) was also a positive surprise, but it points out another reason why the U.S. Fed may be very reluctant to lift interest rates anytime soon. For the most part, U.S. GDP growth is being fueled by consumer borrowing and spending rather than an expansion in manufacturing, or capital investment in growth and export growth. We are not disparaging the makeup of U.S. GDP; consumer spending has been and will continue to be the primary component of GDP. Instead, we are pointing out that the U.S. Fed now very likely has an asymmetric outlook for changes in interest rates. The hurdle to raise interest rates in 2020 and beyond is likely to be impossibly high relative to the likelihood of further interest rate cuts. For already over-indebted consumers, to keep borrowing and spending, consumer confidence needs to be maintained.

In our November commentary, we highlighted the size of the U.S. national debt ($23 trillion) and the size of the deficit ($1.1 trillion). We noted how the three main central bank balance sheets have started to all expand again, and the “attempt” at normalizing monetary policy over the recovery ended very quickly when economic reality began to hit. As an example, the U.S. government's cost to service the debt is about $425 billion per year, using an estimated 1.90% average annual interest expense for 2019. If interest rates were to rise back to 2018 levels (2.49%), the interest expense would increase to $570 billion (an increase of $145 billion). Even with a small increase in interest rates (60 basis points in this example) would meaningfully increase the deficit, which in turn increases the total debt. That’s why it’s called a debt spiral.

We feel that the most likely scenario to "deal" with the debt situation is to keep nominal interest rates very low and real interest rates near zero or negative in order to maintain the ability to service the interest expense. To address the high debt level, the goal is to raise inflation to inflate away the debt, hence the U.S. Fed’s (unrelenting 2% inflation targeting; the ECB (European Central Bank) and BOJ (Bank of Japan) also have inflation targeting goals.

We are not making the U.S. dollar the ultimate big call. We see clear signs that U.S. dollar upside momentum topped a while ago and downward pressures are starting to mount. In figure 4 using DXY, 2 we can see the peak was made back in late 2016. A down leg occurred (Wave A), and a recovery up leg until recently (Wave B). This recovery leg is now rolling over with many negative divergences on the charts. At the very least, we think the medium-term down leg has started (Wave C). 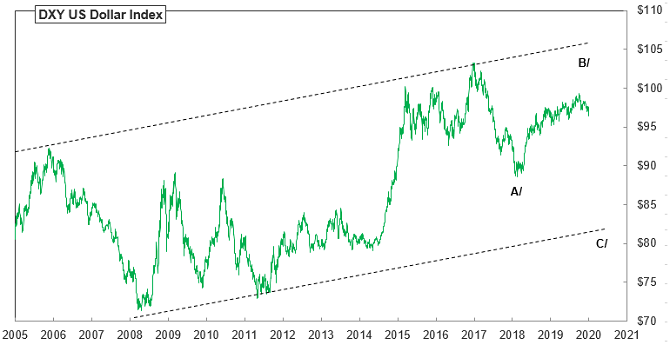 Currencies tend to trade as a relative sum measure of inputs: relative growth, relative yields, relative monetary and fiscal policies. From this perspective, U.S. growth reached its peak back in 2018 and has started to slow. The cyclical component, as measured by late-cycle Capex activity, has also peaked. U.S. yields relative to the G76 topped out back in mid-2018. The U.S. Fed balance sheet has expanded almost $406 billion since the end of August 2019, while the ECB’s balance sheet has increased by $117 billion, and the BOJ has decreased by $123 billion. We wonder out loud whether short-term bills can be sterilized like long-duration bonds were back during QE1, QE2 and QE3, since as short term bills, they need to be rolled over? There is still a reserve shortage so that repurchase operations will continue, but perhaps at a lower rate, once year-end demands have peaked.

The U.S. dollar should weaken if these short-term bills cannot be sterilized (assuming there are no other consequences). As it is, the U.S. Fed has a very distinct divergent policy as it comes to the balance sheet, and we think it will make its way into currency effects. From a fiscal view, the Trump administration actively wants a weak U.S. dollar policy and will undoubtedly continue to pressure the U.S. Fed on the monetary front for a weaker U.S. dollar. The administration will also likely bring about plans to weaken the U.S. dollar before the election. From a policy perspective, the U.S. probably has more maneuvering room relative to the ECB and BOJ to reduce the U.S. dollar if they choose to do so. If growth were to stall, the desire to weaken the U.S. dollar would increase.

In our August report, we touched on how a weakening U.S. dollar would provide a boost to the global economy; and, we also questioned whether a U.S. dollar devaluation would be co-ordinated or something more chaotic. We still do not know the answer yet, but if growth were to unexpectedly slow or worsen, we would likely see it reflected in currency volatility first. The JPM (JPMorgan Chase & Co.) G7 Currency Volatility Index is currently sitting around multi-decade lows. Such lows usually preceded major moves in currencies historically. Volatility, in general, is very compressed across all asset classes as a result of central bank activity. Volatility by its nature is inherently mean reverting —  in other words, the pendulum will swing. 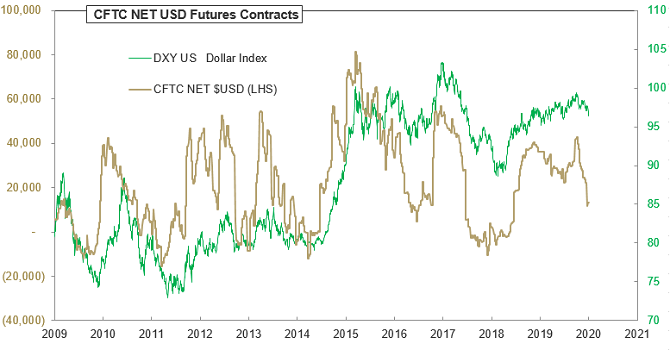 Putting it Together for 2020: The Second Leg for the Gold Advance

The dramatic turnaround and drop in interest rates was the main narrative for gold in 2019. Looking ahead for 2020, we think U.S. dollar weakness will be the second leg for the gold advance. Though interest rates may not have the scope for another massive move lower, we believe the upside is limited and will provide a solid floor for gold in 2020. The asymmetric view on interest rate directionality will have a very positive impact on gold pricing beyond the actual yield level. We see real interest rates at either zero or negative for the next few years. The level of negative real yields will likely be determined by the level of economic or financial stress. We are in the most extended U.S. economic cycle in history, with clear signs of the late-cycle peak already in place and mounting downside pressure.

You are now leaving sprottus.com and entering a linked website.