To us, the operative questions are:

1) What factors ignited gold’s breakout from a three-year consolidation?
2) Are these fundamentals likely to persist in future periods?

We offer the following answers. Gold is clearly responding to a global pivot by central bankers back towards concerted monetary easing, and the intractable nature of excessive global debt levels suggests we are in the very early innings of the developing easing cycle. In short, for gold this is the real deal and we suspect things are just getting started.

...for gold, this is the real deal and things are just getting started.

At Sprott, our investment thesis for gold rests largely on the unsustainable nature of global debt levels. While investor consensus recognizes that debt levels are a daunting structural dilemma, the inability to predict either timing or method of inevitable resolution has long relegated debt concerns to the back burner of investor priorities.

In this post, we develop the possibility that global asset markets may finally have reached the point at which excessive debt levels are overwhelming longstanding relationships in normally functioning capital markets such as interest rates, time preferences and capital formation. Named after Austrian economist Hyman Minsky, the global economy in 2019 may be entering a “Minsky Moment,” at which the cumulative distortions of a long period of debt-fueled growth are finally coming to bear.

Throughout 2018, we made the case that outstanding debt levels precluded the possibility of rising interest rates (long or short) without inflicting severe pressure on reigning financial asset valuations. On the short side of the ledger, we warned that the Fed’s dual policy agenda of simultaneous rate hikes and balance sheet reduction was far too aggressive in the context of still egregious U.S. debt levels. Contrary to popular perceptions of U.S. deleveraging since the financial crisis, the Fed’s Q1 2019 Z.1 Report disclosed that total U.S. credit market debt now stands at $73.1 trillion, up 33% from Q1 2009. Importantly, as shown in Figure 1, the U.S. debt-to-GDP (gross domestic product) ratio still measures a bloated 347%, not far from its Q2 2009 peak of 382%.

The prior century of U.S. financial history suggests healthy capital formation in the U.S. economy hinges on reducing the debt-to-GDP ratio to roughly half its current level. Of course, this would require either extinguishment of roughly $30 trillion in debt without impacting GDP, or doubling GDP without incurring an incremental dollar of debt, both exceedingly remote possibilities. Remaining options are debt default or debasement, and we are certain global financial stewards will do everything in their power to choose the latter over the former. 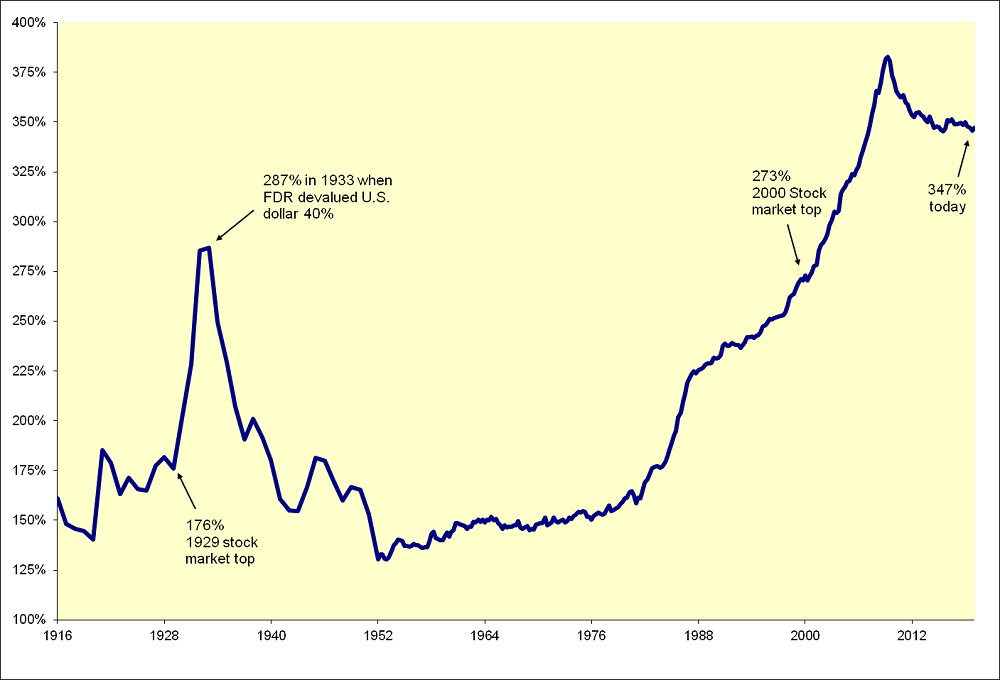 To us, the Fed’s eight years of zero interest rates and QE (quantitative easing) asset purchases served as tacit admission that the U.S. financial system requires artificial liquidity to forestall the devastating debt rationalization inherent in rebalancing paper claims (debt) to underlying productive output (GDP). Indeed, the serendipitous and largely unquestioned evolution of the Fed’s congressional mandate from “stable prices” to a self-appointed “2% inflation target” serves as proof-positive that the Fed’s paramount concern is avoiding debt deflation at all costs.

Given the awkward messaging in maintaining rates at the zero bound, we are not surprised that the Fed began the process of “normalizing” the fed funds rate back in December 2015. After three full years, the Powell Fed notched in December 2018 the Federal Open Market Committee’s (FOMC’s) ninth rate hike, to a 2.5% upper bound. In all honesty, we did not expect that the U.S. financial system could sustain a 2.5% fed funds rate without significant dislocation of asset prices. Low and behold, financial turbulence arrived with a vengeance in Q4 2018, when the S&P 500 shed a startling 19.63% between Chair Powell’s October 3 “long way from neutral” comment and Treasury Secretary Mnuchin’s convening of the President’s Working Group on Financial Markets on Christmas Eve.

A precis of Fed behavior since the 2018 Christmas Eve miracle of reversing asset markets would best be characterized as one of the sharpest Fed policy U-turns on record. Short-circuiting months of debate over whether the Fed’s January 2019 tonal change merely represented a “pause” in an ongoing tightening cycle, the FOMC cut the fed funds rate 25 basis points on 7/31/19. After declaring in December that the Fed’s balance sheet reduction program was “on autopilot,” “working well” and “not subject to review,” Chair Powell shuttered the program completely on 7/31/19. Needless to say, we can only smile at Chair Powell’s seemingly earnest assertion that the Fed’s 7/31 rate cut was a “mid-cycle adjustment” and “not the beginning of a long series of rate cuts.” Mark our words, just as with early 2019 arguments for a “pause in the Fed’s tightening cycle,” current prognostications for a “one and done insurance cut” belie shallow understanding of what is truly troubling the Fed.

A quick survey of economic conditions, in fact, is hardly supportive of a Fed rate cut. Q2 GDP measured 2.1%, with personal consumption leaping at a 4.3% annual rate (fifth strongest quarter during the past 13 years). The 3.7% unemployment rate rests at a five-decade low and U.S. equity averages were setting fresh all-time highs in late-July. Come to think of it, when did “sustaining the expansion” even become a consideration in the Fed’s congressional mandate? (Answer: gross mission creep.) To us, it is patently clear that despite respectable output growth, full employment and record financial asset valuations, the Fed now believes it has strayed too far from the zero bound to guarantee against incipient debt deflation. Consequently, we expect fed funds to retreat toward the 1% level and beyond in very short order.

On the long end of the rate spectrum, we have maintained that excessive debt levels absolutely mandate ever-declining interest rates. We have repeatedly cited Stephanie Pomboy’s annotated graphic of 10-year U.S. Treasury yields (Figure 2). On every occasion since 1981 when 10-year Treasury yields have backed up significantly, a financial crisis has invariably ensued. Therefore, we are always amazed when consensus begins to project rising Treasury yields without repercussions, such as during the fall of 2018, when consensus extrapolated Chair Powell’s hawkish resolve all the way to a sustainable breakout in Treasury yields. Very simply, if rates have been unable to rise for 37 years without catalyzing financial distress, why do investors EVER conclude they might magically be free to rise in the future, especially since aggregate debt measures only continue to deteriorate? 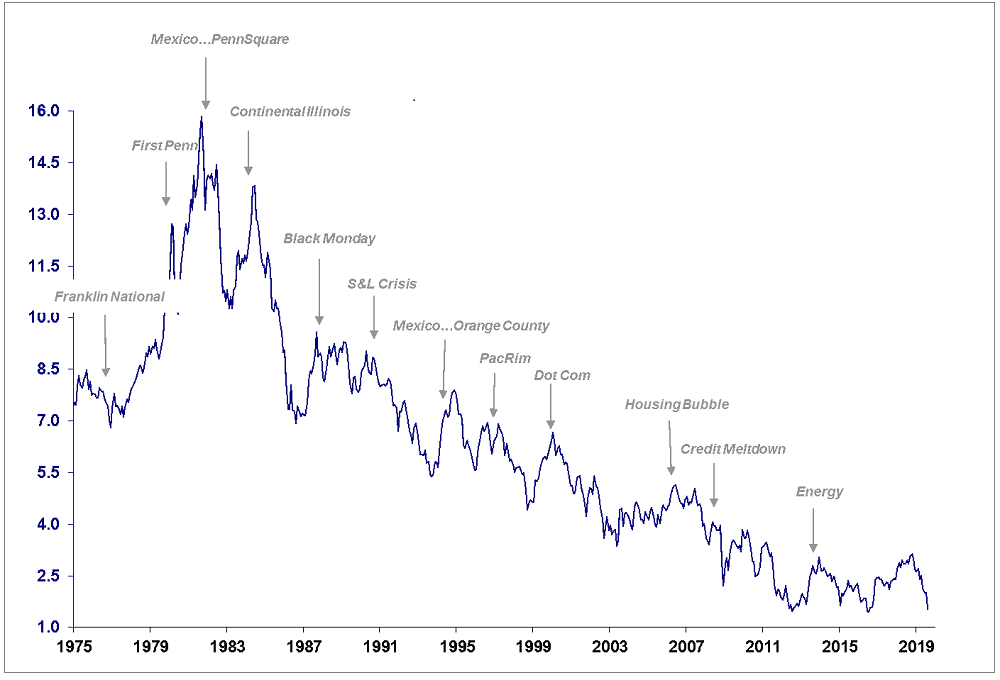 Boiling things down, we view gold’s prospects as inextricably linked to consensus recognition that global interest rates not only cannot rise, but must continue to decline to keep the ever-burgeoning debt pyramid from toppling.

Along these lines, we attribute gold’s accelerating performance since October 2018 to broadening recognition that global rate structures are once again crashing through the zero bound. As shown in Figure 3, the global total of negative yielding sovereign credit has literally skyrocketed in recent weeks to a mind-numbing $16.7 trillion as of 8/15/19. For perspective, this total represents a rough triple from the $5.7 trillion total as recently as October 2018. And it goes without saying, this total is quite the departure from the absolute zero total for negative-yielding bonds during the 5,000 years of financial history prior to 2015 (thank you Bank of Japan for the clever innovation). 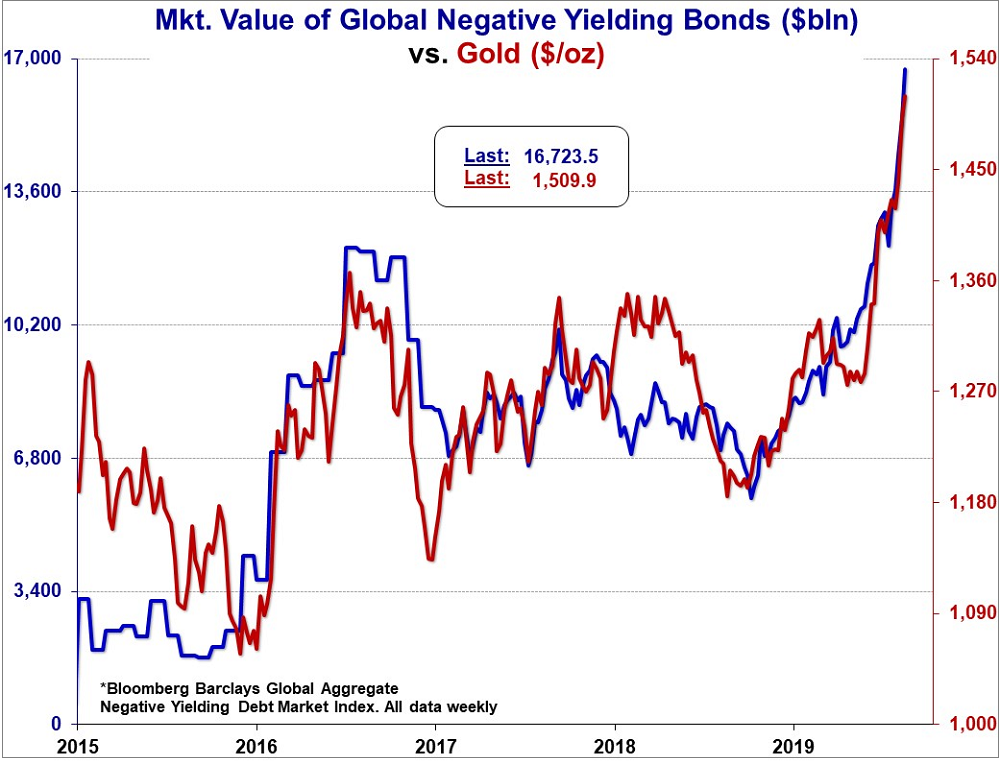 Perhaps inured by lofty equity averages, general investor consensus remains relatively unconcerned by the global explosion in negative-yielding debt instruments. Especially for U.S. investors, there is a pervasive sense that ramifications of negative rate structures are just “not our problem.” Sidestepping for the time being the profound implications of negative rates for capitalism itself, we wanted to provide a bit more detail on the composition of the oft-cited negative-yielding sovereign debt total.

In Figure 4, we have compiled. what we believe to be a comprehensive snapshot of global rate structures as of the close of trading on 8/15/19. We were amazed to discover that the entire yield curve for six EU countries now trades at negative yields (Switzerland, Germany, Netherlands, Finland, Sweden and Denmark). French and Austrian curves are negative through 20 years; Japan and Belgium are negative through 15 years; and Ireland, Slovakia and Slovenia are negative through 10 years. Indeed, we were only able to identify three developed economies with entirely positive rate curves: United States, United Kingdom and Canada. 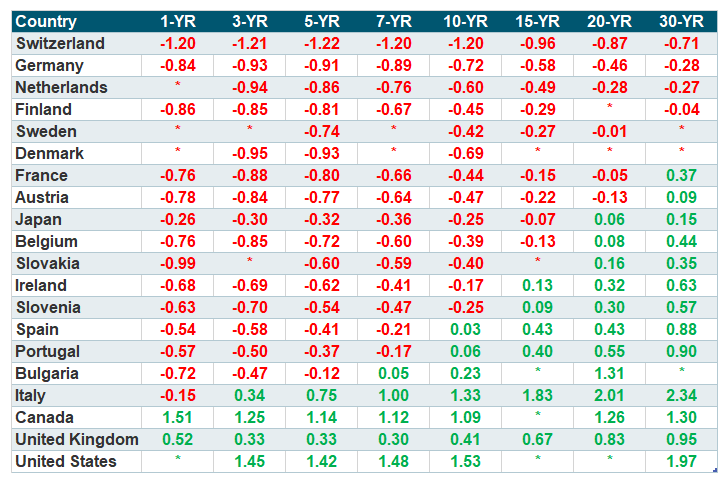 We have no special insight into the impact of negative interest rates on future valuations for traditional asset classes such as stocks, bonds and real estate. But as we stated earlier on, we believe that for gold this is the real deal and we suspect things are just getting started.