In our mid-April report, we highlighted ten market variables we view as bullish for the gold price. During the intervening month, these factors have remained generally supportive, yet spot gold has traced out a 6.28% correction (from an intraday high of $1,295.61 on 4/17 to an intraday low of $1,214.26 on 5/9). More than anything else, we view gold’s pullback as a reflection of persistent strength in U.S. equity markets. It is no coincidence that as gold marked its 5/9 trading low, the S&P 500 Index surpassed the 2,400 level for the first time. Simultaneously, the VIX volatility index declined to rarified single-digits (9.56), approaching lows last recorded in December 2006. In short, equity markets, to gold’s reflexive challenge, have rarely been so complacent. What is fueling this record-breaking investor complacency? We would suggest market perceptions of risk have been all but extinguished by relentless provision of central bank liquidity.

Since the final taper of QE3 in November 2014, the Fed has passed the baton of global liquidity-creation to central banks around the world. Somewhat surprisingly, aggregate asset purchases by the Fed’s global colleagues have exceeded the scale of QE3 by an accelerating margin. Throughout 2016, monthly asset-purchases by the European Central Bank (ECB), the Bank of Japan (BOJ) and the Bank of England (BOE) totaled $185 billion, or more than twice the rate of QE3 liquidity. Year-to-date in 2017, Bank of America (Michael Hartnett) calculates the annualized growth-rate of asset-purchases by the Fed, ECB, BOJ, BOE and the Swiss National Bank (SNB) totaled $3.6 trillion through 4/19, dwarfing all prior rates of central bank balance-sheet expansion. To lend perspective to the scale of ongoing global QE, we plot in Figure 1, growth in the balance sheets of the Fed, the ECB and the BOJ. While the occasion received little fanfare in financial media, the size of the Fed’s balance sheet at month-end April had actually been surpassed by both the ECB and the BOJ 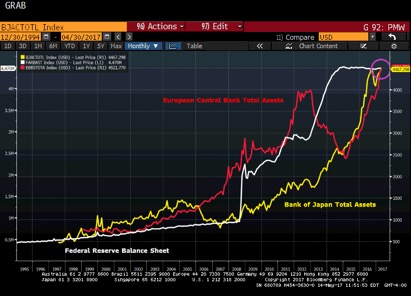 Zeroing in on recent developments in the Eurozone, the ECB expanded its balance sheet by 465 billion euros during the first four months of 2017. Figure 2 demonstrates this growth was heavily concentrated in the month of April. Obviously, the ECB was showering the continent with liquidity in concerted effort to cushion the Eurozone from potential shocks emanating from French presidential elections on 4/23 and 5/7. Perhaps the SNB was displaying similar trepidation in boosting its total equity holdings to $80.4 billion during Q1, up a record $17 billion during the three months. (If the Swiss National Bank prints money to boost its AAPL stake from 15 to 18.9 million shares during a quarter, why should equity investors feel anything but complacent?)

Lest financial markets might have missed the message in the ECB’s furious springtime pump-priming, Eurozone central bank stewards unleashed on the eve of first-round voting in France a spirited barrage of we-have-your-back jawboning:

"The central bank should be ready for any shocks that should materialize [after the French election]. Intervening very quickly is really very easy now given the instruments we have. But as we have seen in similar cases, no need has really been observed. And the reason is that all market participants know that these instruments are there to be used." —Ignazio Visco, Governor, Bank of Italy, 4/22/17

"If there should be problems for specific French banks liquidity-wise, then the ECB has the…ELA, Emergency Liquidity Assistance, but we don’t expect of course any special movements.”— Ewald Nowotny, President, National Bank of Austria, 4/22/17

"We hope that a reasonable candidate can win – somebody who is in favor of free markets – but we cannot exclude that there will be more pressure on the Swiss franc. But as you know we also have our instruments to react to such a situation…We have more leverage on interest rates, and we, of course, have our willingness to intervene if necessary on the foreign exchange market." — Thomas Jordan, Chairman, Governing Board, Swiss National Bank, 4/22/17

Of course, the 2017 prize for central bank self-importance was earned by the startling victory-lap declaration of ECB Governing Council member, and Central Bank of Lithuania Governor, Vitas Vasiliauskas, who remarked in a 5/11 Bloomberg interview:

"Markets say the ECB is done, their box is empty. But we are magic people. Each time, we take something and give to the markets — a rabbit out of the hat!"

Under the tutelage of such a determined contingent of central bankers, it would be fair to say that it has become an ill-advised endeavor to be overly bearish on any financial asset! However, we would make one observation about central bank behavior so far in 2017. If the ECB and local EU central banks became this exorcized over fallout from essentially a primary vote in the world’s sixth largest economy, we are likely nearing the endgame for central bank saturation of global financial markets.

In our view, the Fed’s recent willingness to raise rates has been enabled as much by accelerating global central bank liquidity as by any tangible improvement in domestic economic performance. Indeed, the May FOMC statement reflected a notable uptick in nothing-to-see-here insincerity in the Fed’s contention that “the fundamentals underpinning the continued growth of consumption remained solid.” The facts are that Q1 GDP of 0.7% marked the weakest GDP growth in any quarter in which the FOMC has hiked rates since Chairman Volcker did so in February 1980. To VIX-hugging optimists, allured by trendy dismissal of first quarter “seasonals,” we offer Figure 3 as food for thought. After tracking the S&P 500 Index higher in tight lockstep since election-day, the Citi Economic Surprise Index has utterly collapsed since mid-March. 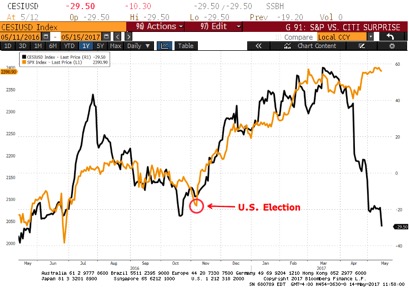 We recognize that new all-time highs for the S&P 500 foster an environment of investor security unlikely to fuel urgency in precious-metal markets. If stocks rally every week, who needs gold? On the other hand, one could make the case that year-to-date (5/12) gains for spot gold (6.58%) and the NYSE Arca Gold Miners Index (8.23%) are comparatively solid in the context of year-to-date gains for the S&P 500 (6.79%). Perhaps gold’s relative stability belies a degree of incipient investor apprehension. Whatever the motivating factors may be, the suppression of volatility in equity markets is currently being reflected in equivalent suppression of volatility in gold bullion. Indeed, as shown in our addenda graph, implied volatility for spot gold currently stands at a 10-year low. The insurance value of a portfolio commitment to gold is always cheapest before the onset of market volatility against which gold provides protection. For this reason, historic complacency in equity markets may actually be signaling growing urgency for a commitment to precious metals. 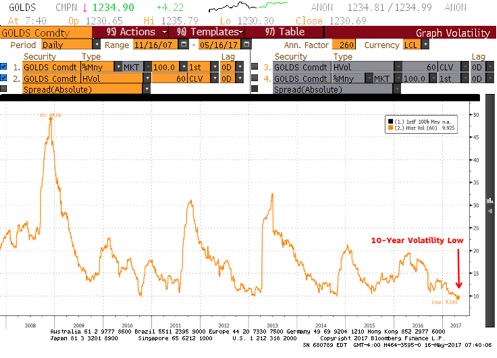