In late January, the 10% sell-off of the S&P 500 Index was caused by the prospect of a global trade war. Six months later, the U.S. equity markets have recovered but “trade war” headlines dominate the news. On June 1, the Trump administration launched its steel and aluminum tariffs on imports from Canada, Mexico and the European Union. New tariffs on Chinese goods followed and we are now in the midst of a growing global trade war.

Some market participants believe that the United States is insulated from the effects of a global trade war. Others are of the opinion that a full-blown trade war is unlikely, while some still believe that mutually beneficial trade agreements can still be brokered. Market participants have attempted to de-risk their portfolios by moving into the U.S. dollar and U.S. equities, which explains their recent strength. U.S. technology, healthcare and consumer discretionary stocks are now the most crowded trades while emerging market equities, bonds and currencies have been sold off. The move out of emerging markets, in particular, explains some of the recent strength in the U.S. dollar.

Commodities have been another casualty of the global trade war. Except for crude oil, whose strength is related to pressure on supply from Venezuela and Iran, virtually all commodities, including gold have been liquidated. The GLD ETF,1 which we use as a proxy for gold bullion, saw its value drop by 5.68% in Q2 of 2018 (year-to-date GLD has lost 4.04%). Gold equities have stumbled in line with the yellow metal; GDX2 has declined 4.00% year-to-date.

For some time, we have highlighted silver’s value proposition relative to gold. For most of Q2, silver outperformed gold, although some relative gains were surrendered in late June. For the long term, we continue to see silver and silver equities favorably positioned to provide outsized gains relative to gold and gold equities. As of June 30, the gold/silver ratio was a steep 80:1, and we believe it is likely to return to its long-term historical average of 60:1.

One of the most commonly asked questions of late has been: Why isn’t gold doing better? Admittedly, we have also been perplexed. Finance 101 teaches us that the market is an accurate discounting mechanism – unless uncertainty prevents the market from doing so. We see new forks emerge in the U.S. policy towards trade and geopolitics almost daily. The current Trump administration is currently engaged in a trade war with the European Union, Canada, Mexico and China.

Despite all the bluster, the monetary impact of the trade war remains quite small. Currently, $34 billion worth of Chinese goods are being hit with an import tax, for which China has retaliated in kind. Canada countered in early July after $12 billion worth of goods, primarily steel and aluminum, were slammed with a tariff. The U.S.-Canada trade partnership is worth almost $630 billion while the U.S.-China trade relationship is valued at nearly $650 billion. The U.S. currently trades approximately $2.3 trillion worth of goods with the world and the portion of goods affected by import tariffs is estimated to be $92 billion, or a mere 4%.

In the grand scheme of things, tariffs on a small portion of trade have had minimal impact. While Trump has threatened to tax the $500 billion of goods being imported from China and has even threatened local automakers from manufacturing cars in NAFTA countries, many investors remain hopeful that the trade disputes will be settled before an all-out trade war occurs. If the current trade “skirmish” leads to a full-scale trade war, we have the potential to see the emergence of a strong bull market for gold.

Seeking Shelter in the U.S. Dollar

The knee-jerk reaction for most market participants, when faced with the prospect of loss, is to seek shelter under the comforting shade of the U.S. dollar. The prospect of a global trade war has prompted investors to flee emerging markets, particularly those most exposed to potential trade war fallout and repatriated capital. This has placed a sizeable bid under the U.S. dollar, in spite of spiraling U.S. budget deficits. U.S. dollar strength has also been fueled by U.S. corporations that began repatriating cash held offshore for years. This repatriated cash appears to have been promptly deployed into share buybacks and not into capital projects as the Trump administration had hoped. It is little wonder that the U.S. dollar has appreciated relative to virtually every major currency, including gold. 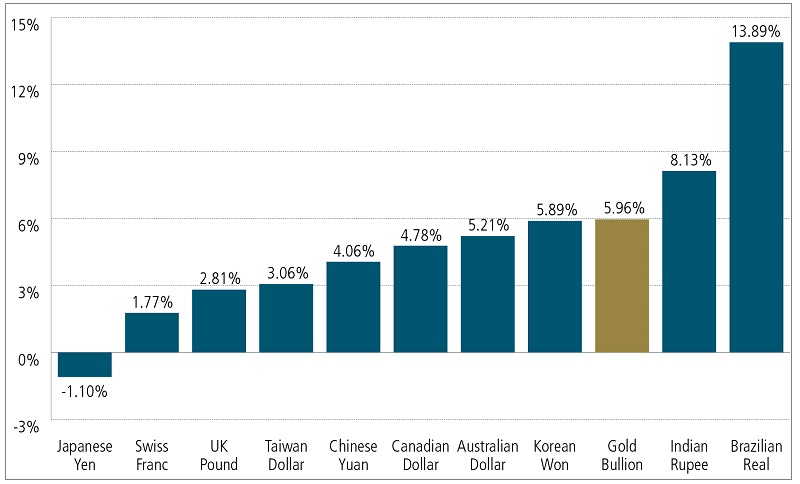 Panic buying of the U.S. dollar and liquidation by frustrated holders of gold have led to a situation in which everything that could go wrong for the yellow metal has gone wrong, and sentiment in gold has never been weaker. This is easily evidenced by anemic futures positioning in gold. By contrast, gold equities have held up remarkably well. Gold equities generally lead gold bullion prices. With gold futures positioning near two-year lows, it leads us to believe that while commodity traders have liquidated their speculative positions, long-term oriented investors have encouragingly stood steadfast to gold. 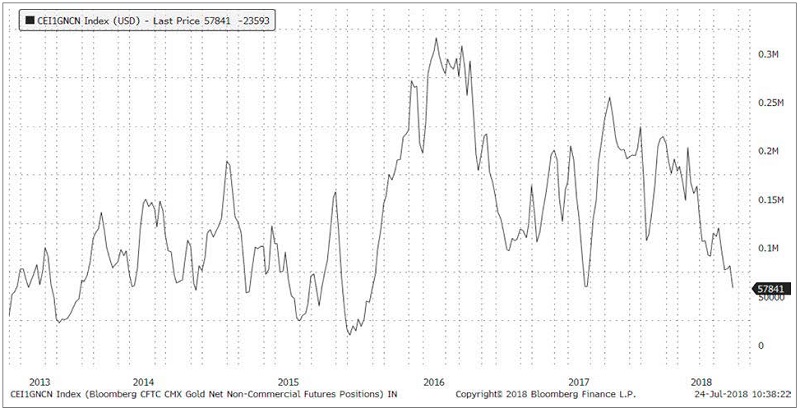 Trade Wars Often Hurt Those They Should Protect: Lessons from Smoot-Hawley

In the past, U.S. trade wars have often hurt those they were meant to protect: American consumers and producers. The automotive revolution in the 1920s resulted in massive job losses in the horse carriage industry. Grazing land was freed up for agriculture resulting in an agricultural boom. Record quantities of crops were produced. Eager to protect its farmers, U.S. lawmakers passed the Smoot-Hawley Tariff Act in June 1930. More than 3,200 goods were impacted. The pleas of the economists and even pushbacks from President Herbert Hoover did not result in a light-bulb moment for the Republican lawmakers in power. Unsurprisingly, America’s trade partners retaliated with their own tariffs. Three years later, U.S. imports had decreased by 66% while exports had decreased by 61%. Ironically, those most impacted by Smoot-Hawley was the group the Act meant to protect – the farmers.

Whirlpool’s "Positive Catalyst" is a Washout

Here is a more recent example.

Following the election of Trump, Whirlpool lobbied the administration to “even” out the playing field for washers and dryers. LG and Samsung had been dominating this segment in recent years. On January 23, 2018, the Trump administration imposed tariffs as high as 50% on imported washers and dryers. Whirlpool shares hit their 2018 YTD price high on January 26, 2018, closing at $183.20. As of July 30, Whirlpool shares stood at $132.37, down from $168.48 on January 2, representing a decline of more than 20%.

While craving protectionist measures, Whirlpool wasn’t ready for a trade war as rising costs of steel and aluminum led to increased costs. While washer-dryer prices have increased by 20% in the three months leading to June, Whirlpool’s profits are in decline and consumers are now paying more for their washing machines. In the meantime, Korea is not happy either as it is exporting fewer washing machines into the U.S. Trade wars are complex because the consequences of poorly thought out actions can be disastrous.

Gold may Prove to be the Ultimate Winner

Gold, however, may prove to be the ultimate winner given the most recent trade conflicts. Futures positioning in gold is at a trough. GLD options pricing seems to indicate a level of negativity, which has previously coincided with lows in gold. Recently, we have seen the producer price index (PPI) continue to climb as other American producers are seeing rapid cost inflation. The consumer price index (CPI) is now rising faster than wage inflation, which is likely to make the average American feel worse off than they did two years ago. 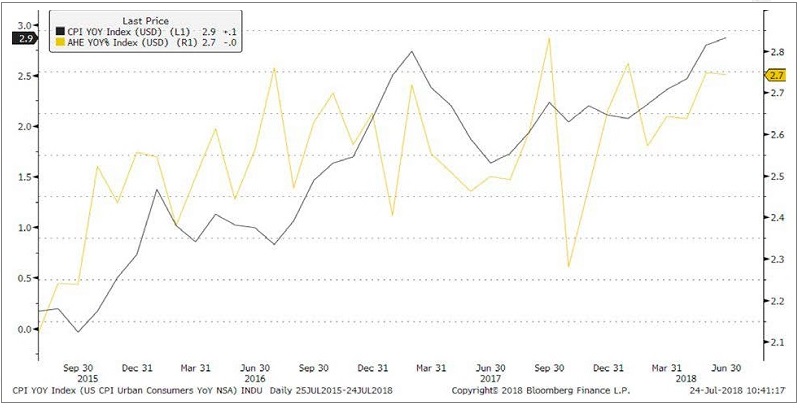 Source: Bloomberg (July 2015 – July 2018). AHE YOY% measures wage growth and represents the U.S. Average Hourly Earnings All Employees Total Private Yearly Percent Change SA; CPI represents the Consumer Price Index, and is a measure of the average change over time in the prices paid by urban consumers for a market basket of consumer goods and services.

The expected 2018 $804 billion U.S. budget deficit represents a 17% increase over 2017. Surprisingly, despite a strong U.S. dollar, demand for U.S. Treasuries is near multi-year lows as measured by the bid-to-cover ratio. Perhaps sovereigns such as China and Japan who have traditionally recycled their U.S. profits into U.S. Treasuries are no longer choosing to do so. The lack of demand for U.S. debt at a time when U.S. fixed-income yields are higher than debt yields of other developed economies like Germany, France, Canada and Japan is quite striking. The structural takeaway for us is simple: The recent strength in the U.S. dollar is likely to prove to be short-lived.

Unfortunately, the trends we described above play out significantly slower than the speed of a Trump tweet. Fortunately, this allows investors plenty of time to position their portfolios appropriately. We are confident that the necessary elements are in place to provide the robust underpinnings for a durable bull market for precious metals and precious metal equities.

Shree Kargutkar is a Portfolio Manager at Sprott Asset Management LP, which is the sub-advisor for Sprott Gold and Precious Minerals Fund and Sprott Silver Equities Class.